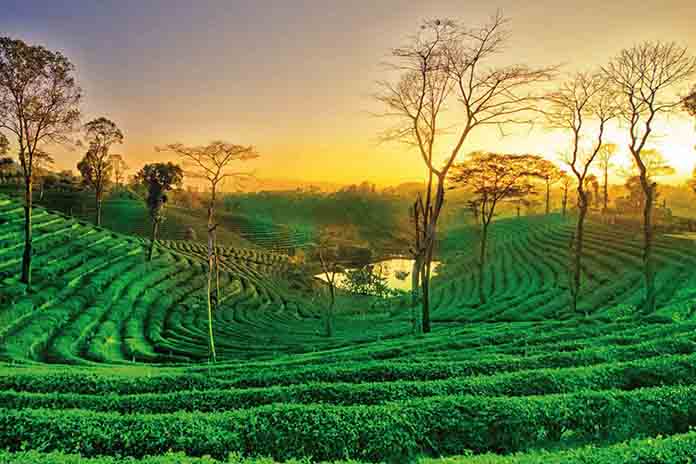 One of India’s last great natural and anthropological sanctuaries which very few filmmakers have explored, Assam is home to hills, crisscrossed by major rivers such as the mighty Brahmaputra, Barak and their tributaries, roaring waterfalls, thick and dark forests, heavy rains during monsoon, innumerable varieties of flora and fauna, mysterious clouds, melodious folk music, thrilling dances and festivals, variety of many delicious dishes, hand looms and handicrafts. The land of blue hills and red rivers, Assam is the gateway to the north-eastern states and has been aptly described as the Sentinel of Northeast India 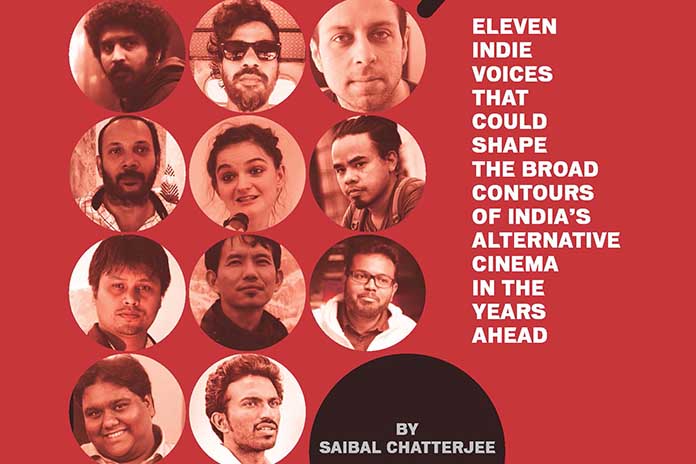 Is the Future Here?

A filmmaker who brings an impressively individualistic style and vision to the medium, Kolkata-born Aditya Vikram Sengupta won instant admirers with his 2014 debut Asha Jaoar Majhe (Labour of Love), which bagged a prize at the Venice Film Festival. The virtually dialogue-less film used images, sound and music to craft a lyrical love story set in the unsettled times brought on by the economic recession of 2009. With his next essay, Jonaki, which premiered in the International Film Festival of Rotterdam, Sengupta, who is a graphic designer by training, has gone even further down the path of pure form of cinema, employing heightened reality and complex dreamscapes to probe love, loss, death, grief and social decay. The result is a film of stunning images and beautiful moments that blend hypnotic surrealism and visual poetry.

A multidisciplinary artist who was the creative producer of Mukti Bhawan, Kabir Singh Chowdhry has earned his spurs as an independent director with the remarkable documentary-fiction hybrid Mehsampur. The film takes a part established genre norms in telling the story of a filmmaker researching for a biopic on the iconic folk singer Amar Singh Chamkila, the Elvis of Punjab, who was gunned down in the late 1980s along with his wife and two other band members. The firebrand performer – he revelled in challenging cultural, social and religious shibboleths – was only 27. The film is every bit as rebellious as the man whose life it probes. It calls into question the ethics of filmmaking and the state of affairs in a once prosperous state that appears to have sunk into the doldrums of late. The highly inventive overlapping of meta-fiction and documentary elements yields a challenging, provocative, playful movie experience.

Chandigarh-born Ivan Ayr spent several years of his childhood in Delhi and still has extended family in India’s capital city, which has earned notoriety in recent years for the risks that women face here on a daily basis. He channels his concern into Soni, which premiered this year in Venice after snagging the best work-in-progress award at the NFDC Film Bazaar in 2017. It’s a naturalistic portrait of a Delhi policewoman and her superintendent, who grapple with gender expectations and deeply entrenched patriarchy as they go about their work in a city where cases of sexual assault are alarmingly frequent. Soni won the best film award at the recent Pingyao International Film Festival – part of the prize money will go into funding the director’s next project.

The Chennai-based cinematographer pressed his decade-long experience behind the camera into service in the making of his directorial debut, To Let, which has won multiple awards. It is a deeply personal film about a young movie industry professional and his family looking for a house in Chennai during the information technology boom in the first decade of the millennium. The film is marked by a storytelling style that eschews the conventions of Tamil cinema and uses a soundscape that springs from the milieu the story is set in. Chezhiyan is in the midst of his next production, which is in the Co-Production Market of the 2018 NFDC Film Bazaar.

For women, by Woman – Dar Gai

Kiev-born Daria Gaikalova, who adopted the abbreviated professional name in order to disguise both her gender identity and her nationality, has helmed two remarkable Indian independent films, Teen Aur Aadha and Namdev Bhau – In Search of Silence, in quick succession. The first title has travelled around the globe and picked up many awards. The latter has just begun its journey but is already making waves. As much at home in India as she is in her native Ukraine, Dar Gai is set to start filming a new Hindi feature soon.This time around, it will be a feminist film cast in the Bollywood mould and set in the heart of Uttar Pradesh. And that isn’t the only Indian story she has in the pipeline – hers is a career that is poised to go great guns.

Born and raised in a remote village in Ri Bhoi district of Meghalaya, Dominic Sangma learnt the ropes of filmmaking at the Satyajit Ray Film and Television Institute in Kolkata. His first feature film, Ma’Ama (Moan), was the only Indian film to make it to the International Competition section of the recent MAMI Mumbai Film Festival. Steering clear of overtly dramatic methods, he turns his camera’s gaze upon his own family, his father to be precise. In a village on the Meghalaya-Assam border, a remarried octogenarian has, every single day of the last 30 years of his life,dreamt of reuniting with his deceased first wife, the filmmaker’s mother. Ma’Ama is an intense probe into mourning and the process of coming to terms with bereavement.

Independent Guwahati-based filmmaker Jaicheng Jai Dohutia has provided evidence of his skills in his very first film, Haanduk – The Hidden Corner, made in the Moran language. It fetched him a National Award as well as a Grand Jury Prize of the 2016 Mumbai Film Festival. His next project features in the 2018 Film Bazaar C0-Production Market. Filmed on real locations and with non-actors, Haanduk, inspired by a true story, delves into the effect of militancy on ordinary lives. It tells the story of a mother, who performs the last rites of her bullet-ridden son, a member of an extremist outfit, only to be told that the body is probably someone else’s.

Sange Dorjee Thongdok’s first film, Crossing Bridges (2013), about a man who returns to his village in Arunachal Pradesh after losing his job, was the first even made in the language of the Sherdukpen tribe to which the director belongs. Thongdok, also the first film school alumnus from his community of a film school, shot the film in his own village, Jigaon in West Kameng district. It probes the mind of a man who returns home and gradually begins to reconnect with his people and culture, a process that forces him to have a relook at his life and career choices. The filmmaker’s second feature River Song premiered in the International Indian Film Festival in Stuttgart this year. He is now working on his third film.

A self-taught filmmaker who quit his corporate job to be closer to cinema, Chennai-based Vijay Jayapal has learnt the art and craft of the medium from voraciously watching world cinema and the works of Indian greats like Satyajit Ray and Adoor Gopalakrishnan. He started off with short films and corporate videos. In 2016, he made his first feature, Revelations, a low-key drama about marriage, infidelity and loneliness set in Kolkata. The film stood out for its sustained restraint, a trait that owed no debt to commercial Tamil cinema. Jayapal is currently filming a paranormal thriller set in Kerala and the hills of northern India. His work represents a revolt against the insularity of much of the cinema in his home state, an exercise that can only be strengthened by his third film – an Indo-Korean co-production titled The Yellow Jade.

From Bengal with Love – Arjunn Dutta

Independent Kolkata filmmaker Arjunn Dutta’s Abyakto (The Unsaid), a mother-son drama, is competing this year for IFFI’s Centenary Award for the Best Debut Film. Although he is a self-avowed Rituparno Ghosh votary, the film has touches of Satyajit Ray’s Charulata thanks in no mean measure to a marvelous central performance from lead actress Arpita Chatterjee. Dutta, who honed his skills with award-winning short films before making Abyakto, is a Bengali director worth watching especially against the backdrop of the disappointing dearth of truly world class cinema from the eastern India state, which not all that long ago was in the forefront of providing Indian cinema its global thrust. How far Dutta on the map of outward looking Bengali cinema will depend on which creative lodestar he tilts more towards – Ray or Ghosh.

Coimbatore-based Arun Karthick is going places with his proposed second film, Nasir, which has won a grant under the co-production scheme of the Netherlands Film Fund and Hubert Bals Fund. Thanks to the development, the film, based on a short story by eminent Tamil writer Dileep Kumar, already has a Dutch co-producer, Rinkel Film, on board. The film, to be shot entirely on the streets and alleys of the director’s home town, is about an amiable salesman whose life is disrupted by communal riots. Karthick’s first film, Sivapuranam (The Strange Case of Shiva), was a single-character drama about a fashion designer completely immersed in his own world. A film without dialogues and songs, it demonstrated the director’s ability to deliver cinematic experimentation couched in a truly global sensibility.

A rider: The above list is by no means exhaustive. There are numerous other Indian filmmakers working in the alternative cinema space that we will be keeping our eyes on. Among them are award-winning production designer Vandana Kataria, who has completed her first feature film Noblemen and is prepping for her second; Megha Ramaswamy, a maker of acclaimed shorts whose first feature project is in the Film Bazaar Co-Production Market; and Jatla Siddhartha (Love and Shukla), a cinematography grad from FTII who is now developing In the Belly of a Tiger, a look at rural lives subsisting on the edge of the India’s development story.