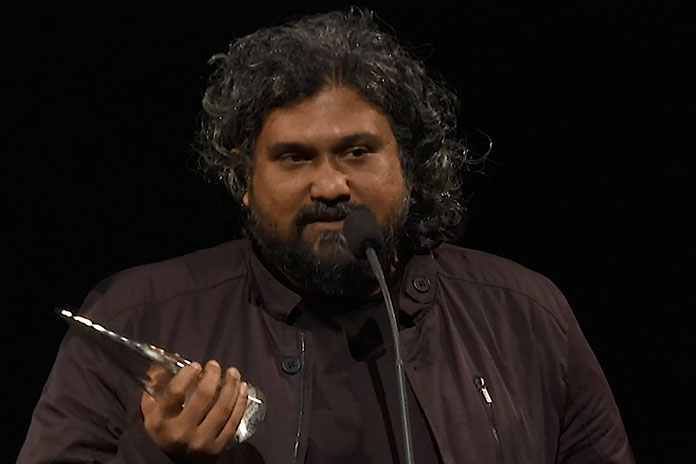 Mard Ko Dard Nahin Hota is a Bollywood-infused action film that tells the story of a young man – quite literally born with the ability to feel no pain – who strikes out on a quest to vanquish 100 foes. The young man develops a skill to learn martial arts to fight criminals. In the film, Vasan Bala’s hero was born with the medical condition known as “congenital insensitivity to pain” (CIP).

The lead stars of the film are Abhimanyu Dassani and Radhika Madan. The films is slated for Indian release on November 23, 2018. Abhimanyu Dassani is actress Bhagyashree’s son. Bhagyashree made her debut opposite Salman Khan in Maine Pyar Kiya (directed by Sooraj Barjatia).

Abhimanyu fights alongside rising star Radhika Madan, a fearless warrior determined to rehabilitate the honour of her one-legged karate master, Manni, who is — as one tends to be in any good martial-arts epic — caught in a gang war with his psychotic twin brother, Jimmy (Gulshan Devaiah in a remarkable dual performance, one half of which seems to be channelling Nicholas Cage circa 1997). Dassani and Madan have delightful chemistry, both in the film’s numerous inventive brawls and the requisite musical set pieces. Madan in particular shines in a progressive subplot that brims with subversive relevance.

The Man Who Feels No Pain is an action-packed ode to a generation raised on the punches of Bruce Lee, the kicks of Jackie Chan, and the dance moves of Chiranjeevi, says Peter Kuplowsky.

Vasan Bala’s film was dicovered by TIFF Artiistic Driector Cameron Bailey when he was scouting for Indian film picks in July for TIFF.

Mard Ko Dard Nahi Hota is the second film from Bala, whose directorial debut was Peddlers (2012) which was selectred at the Critics Weeks Section at the Cannes Film Festival. It was praised when it got screended at TIFF in 2012.