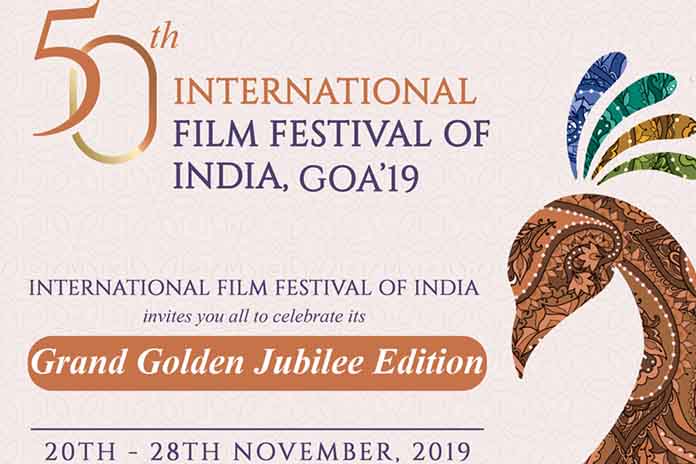 Facilitating the meeting of evolving global film industry aiming to build sustainable ties amongst cultures, and consequently societies, the International Film Festival of India, the oldest event of its kind in Asia which will celebrate its Golden Jubilee edition in November, continues to retain its preeminent position owing to its size, scope and vintage

The International Film Festival of India (IFFI), the oldest event of its kind
in Asia, has over the years witnessed numerous alterations in character,
nomenclature, location, dates and duration. Through it all, it has remained
steadfast in its emphasis on showcasing the diversity of Indian cinema
as well as in its commitment to the celebration of excellence across moviemaking genres.

As India gears up to celebrate the Golden Jubilee edition of IFFI on November 20-28, 2019, this time plans are afoot to trace the history of 49 editions of the festival. The film festival will also showcase the film culture of each and every region across India. Alongside IFFI, Indian Cinema has also expanded to more than 25 regional languages, 50th IFFI will also showcase this unprecedented growth. The key sections at IFFI will include International Competition, Festival Kaleidoscope, World Panorama, Indian Panorama, Masterclasses, In-conversations, Special Retrospectives, Homages, Open Air Screenings, Film Bazaar, organized by NFDC, etc.

American cinematographer and film director known for his collaborations with directors Paul Schrader, Lawrence Kasdan, Michael Apted, and Ken Kwapis will be attending the IFFI Centenary Celebrations. He was till
recently the President of Academy of Motion Pictures Arts and Sciences.

The Ministry of Information & Broad-casting has extended invitation to delegates at the 44th Toronto International Film Festival to attend IFFI.

“IFFI is India’s pride. This year’s IFFI is especially significant since it marks the Golden Jubilee Edition,” says Prakash Javadekar, Union Minister of Information & Broadcasting and Environment, Forest and Climate Change. Russia will be the focus country at the 50th Edition of IFFI.

Business Exhibitions to display relevant technologies for films and an exhibition marking the 150th Anniversary of Mahatma Gandhi will also be organized with this year’s Festival.The number of private theatres taken
on board for showing films during the festival will be further increased
to cater to the high demand for extra screening of popular films.

Goa Chief Minister Dr. Pramod Sawant said that organization of 50th IFFI is a proud moment for the state and his government would leave no stones unturned to ensure top notch infrastructure and hospitality arrangement to make this edition of the festival a memorable one.

With interactions from all around the world, IFFI stands today as a confident body of knowledge, with great memories archived in its heart. It holds gleaming memories of global art, evolving on theatre screens and shadows of visionaries behind it.

Over the past two and a half decades, several other international film festivals have sprung up across India, notably in Kolkata, Kerala and Mumbai, and they all contribute meaningfully to the collective task of taking quality cinema to a people weaned principally on a staple diet of star-driven, song and dance extravaganzas. But IFFI continues to retain its preeminent position owing to its size, scope and vintage.

Not just in the Indian context but also in relation to other major Asian film festivals, IFFI matters. And this is despite all the inevitable ups and downs that it has seen over the years.

All the other major Asian festivals – Tokyo, Busan and Shanghai – are of far more recent origin and therefore lack the history that is associated with IFFI. The festival in Tokyo was launched in 1985, the one in Shanghai began in 1993 and the Busan Film Festival came into being in 1996.

For three decades from the mid-1970s, the festival was held every alternate year in the national capital of Delhi, with other Indian cities – Kolkata, Mumbai, Chennai, Hyderabad and Thiruvananthapuram – taking turns to host the event every other year.