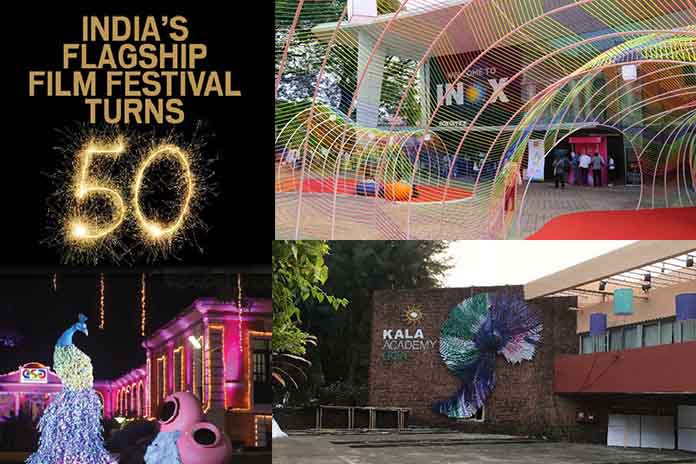 The countdown has started for International Film Festival of India’s (IFFI) 50th edition. The event, which will bring together film personalities and cineastes from across the world, will feature 200-odd films from 76 countries

The 50th edition of Asia’s oldest international film festival is a few weeks away. So, what does the International Film Festival of India (IFFI, November 20 to 28, 2019) have in its kitty that will separate it from the 49 editions gone by? A great deal. And not just in numbers, but also in terms of range and depth. Packed into the nine-day festival will be 200-odd films from 76 countries, which will offer cineastes a wide sampling of this year’s most lauded works, besides a slew of landmark films of historical worth from across the world.

The best of contemporary world cinema apart, IFFI 2019 will bring to film fans in Goa an impressive array of films from the past, including a package of nine previous winners of the Golden Peacock, the festival’s top trophy that now comes with a cash prize of over $55,000. Last year, Ukranian filmmaker Sergei Loznitsa’s Donbass won the award.

The Golden Peacock retrospective includes the 1963 winner, Changes in the Village, directed by Lester James Peries, who is regarded as the father of Sri Lankan cinema. Andrey Zvyagintsev’s Leviathan (2014) is also in the segment along with James Ivory’s The Bostonians (1984), Miklos Jancso’s Hungarian Rhapsody (1979), Samira Makhmalbaf’s At Five in the Afternoon (2003) and Sergey Dvortsevoy’s Tulpan (2008). The sole Indian film in the selection of Golden Peacock winners is the Bengali film MonerManush (2010), directed by Goutam Ghose.

Another commemorative segment aimed at underlining the special status of the upcoming edition of IFFI is a retrospective of Oscar-winning films. Entries in this section range from Casablanca, Gone With the Wind and Ben-Hur to The Godfather, Forrest Gump and The Silence of the Lambs. All About Eve, The Best Years of Our Lives, Lawrence of Arabia and The Sound of Music complete the line-up of Oscar winners.

Six films will screen as part of the Takashi Miike retrospective. The package includes the relatively mellow The Bird People of China. The other Miikefilms in IFFI are Audition (1999), with which the maverick Japanese director known for his no-holds-barred depiction of violence and sexual excess began to acquire international fame; Ichi the Killer, a manga adaptation that is still banned in several countries; the yakuza thriller Dead or Alive; the samurai film 13 Assassins; and First Love, which played in Cannes Directors’ Fortnight this year. Miike, 59, who enjoys a cult following around the globe, will, in the second half of IFFI, participate in a freewheeling conversation on his approach to cinema, the salient aspects of his creative credo, and the influences that have shaped him as a director. He is, of course, one of the brightest stars of what is known as Asian Extreme Cinema. What stands out in Miike’s work is the fresh and innovative ways in which he employs the conventions of horror films and gangster thrillers. The Ken Loach retrospective, besides Kes and Riff, will include the octogenarian British director’s latest film, Sorry We Missed You, which premiered in Cannes earlier in the year.

The 50th IFFI competition has assembled 15 films that promise to give the five-member jury headed by John Bailey, veteran Hollywood cinematographer and former president of the Academy of Motion Picture Arts and Sciences, plenty to choose from. As for the composition of the jury, IFFI has rarely got it better than it has done this time.

Bailey, 77,who apprenticed under ZsigmondVilmos and Nestor Almendros, has over the decades shot some of America’s most-loved movies. Among them are Paul Schrader’s Mishima: A Life in Fopur Chapters, for which he won a Best Artistic Contribution Award at the Cannes Film Festival in 1985, Lawrence Kasdan’s The Big Chill, Robert Redford’s Ordinary People, John Schlesinger’s Honky Tonk Freeway and Jonathan Demme’s Swimming to Cambodia. Earlier this year, in Cannes, Bailey won the coveted French honour – Officier des Arts et Lettres.

As president of the main competition jury, Bailey will be working with four top-flight filmmakers: Scotland’s Lynne Ramsay, France’s Robin Campillo, China’s Zhang Yang and India’s Ramesh Sippy. Ramsay, 49, who made her first narrative feature, Ratcatcher, 20 years ago, has since slowly and steadily built an enviable but small body of work, which includes We Need to Talk About Kevin (2011) and You Were Never Really Here (2017), both of which premiered in the competition section of the Cannes Film Festival.

Moroccan-born French writer-director-editor Campillo, 57, is best known for 120 BPM (Beats Per Minute), which won the Cannes Grand Prix, in 2017. He was the editor of the 2008 Palme d’Or winner, Laurent Cantet’s The Class.

Chinese director Zhang Yang, 52, is the maker of the Tibetan-language films Paths of the Soul and Soul on a String.

Ramesh Sippy, 72, is a prominent Mumbai producer-director who made one of Hindi cinema’s most iconic blockbusters, Sholay. In the 1970s and 1980s, he delivered several major box-office hits, including Shaan, Saagar and Shakti.

For many attending IFFI, the centrepiece is always the 60-odd films that make up the World Panorama. It is a section that yields many riches: 2019 is going to be no different. The expected highlights: Rodd Rathjen’s Australian film Buoyancy, about a Cambodian farmer-boy sold as a slave to a Thai fishing trawler; Dogs Don’t Wear Pants, a Finnish film directed by J-P. Valkeapaa; the Macedonian religious satire God Exists, Her Name is Petrunija, directed Teona Strugar Mitevska; Alma Har’el’ Honey Boy, based on an autobiographical screenplay by Shia LeBeouf; Romanian director Marius Olteanu’s Monsters, which examines the disintegration of a relationship in three chapters; Palestinian auteur Elia Suleiman’s sardonic take on a man looking for a homeland, It Must Be Heaven; Alejandro Amenabar’s While At War; and the Cannes hit, Ladj Ly’s Les Miserables.

World Panorama also has the Canadian film Coda, directed by Claude Lalonde. The film, which is scheduled to be IFFI’s mid-fest gala, stars Patrick Stewart as a veteran pianist who returns to the stage after a three-year hiatus and is assailed by self-doubt. It is left to a free-spirited music critic, played by Katie Holmes, to bring him out of his shell.

A bunch of equally fancied names are part of IFFI’s Festival Kaleidoscope, which showcases films that have earned critical accolades in the course of the year. Led by Bong Joon-ho’s Palme d’Or winner Parasite, this section includes several other titles that premiered in Cannes: Mati Diop’s Atlantique, Jessica Hausner’s Little Joe and Celine Sciamma’s Portrait of a Lady on Fire.