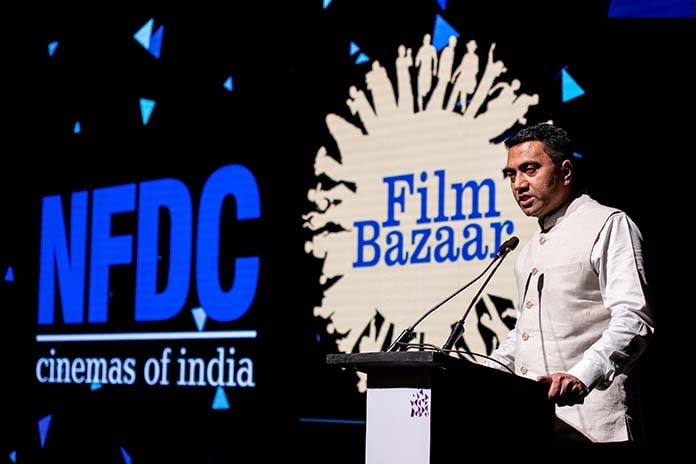 FOUR DAYS OF SHARING AND LEARNING AT

The four-days of intense deliberations and discussions at Film Bazaar 2019 are set to help participants analyses the magnitude of disruptions happening in the Media and Entertainment space and prepare them for the impending future.

Film Bazaar 2019, the leading Co- Production Market for independent filmmakers in India where they converge and network with buyers, sellers, festival programmers and producers, will be kickstarted on November 21 with the aptly named session ‘Open Pitch’ where selected projects will present their video pitches to delegates interested in co-production, funding, sales, and distribution .

The Open Pitch session will be followed by three knowledge sessions – Script to Screen – Empowering Youth with Skill Development, MoMa – In Conversation with Josh Siegel, and Indian Cinema inspiring Entrepreneurs. The sessions will witness some intense discussions and deliberations covering topics ranging from creating an impactful training ecosystem for the youth to acquire technical skill sets required in the M&E sector; creating diversity in programming and how MOMA could be a catalyst to the experience of independent cinemas from India; and how Indian cinema can inspire entrepreneurs to bring innovations to the sector.

Day Two will start with the session ‘Film Bazaar Recommends – Pitches’, where filmmakers of FBR films are invited to Film Bazaar to pitch their first look trailers/film clips and to introduce themselves to the market delegates.

There are three knowledge sessions to be held on Day Two – ‘Eye on India – A Global Perspective of the Indian Film Industry’, Beyond borders – Exploring the Exciting New World of International OTT/VOD Business with Wendy Bernfeld, and ‘The Changing Landscape of Indian Cinematography’.

The sessions have been designed to throw some light on how the world views the dynamic and vibrant Indian film Industry; how filmmakers can go beyond local borders and traditional big players (such as Netflix/Amazon); and how growth of various platforms and screens are defining the boundaries of visualisation, how consumption is driving innovation in the world of cinematography today, and the role of sophisticated technology in pushing this innovation.

Day Three will start with Filmmaker’s Pitch, where filmmakers whose feature films (in-progress or completed) are in the Film Library section of Viewing Room and Industry Screenings are given the opportunity to pitch their first look trailers/film clips.

The day will see unfolding of sessions on ‘Celebrating 50 Years of IFFI’, ‘Decoding Co-productions: International Partnerships and Film Funds’, ‘Navigating Film Festivals’, and ‘The Evolving Narrative – A View from the Writer’s Desk’.

The highest number of knowledge sessions have been reserved for Day Four, which will see six sessions taking place – ‘The New Matrix of OTT Business’; ‘Cinemas of India – Many Stories: Many Nuances, Many Languages’; ‘Harnessing the power of engagement – the FFO model’; ‘Hitting the right notes – A Guide to Music Rights’; ‘The Multiple Hues of the LGBT Narrative in India’; and ‘The new leadership dimension – Women Producers’.

Fourteen projects have been selected to participate in the Co-Production Market. The selection presents 14 projects from India, Bangladesh, Bhutan, France, Nepal, Singapore and USA. The line-up is an eclectic mix of stories in Hindi, English, Bengali, Malayalam, Assamese, Nepali, Dzongkha (Bhutanese) and Gujarati from established filmmakers as well as new talent.