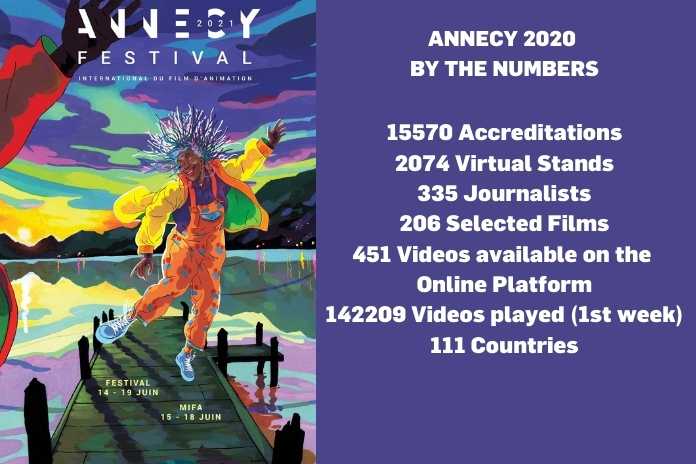 Organizers of Annecy International Animation Festival have announced the first part of the official selection of Short Films, Graduation Films and TV & Commissioned Films. More than 2,700 films were registered in these categories, coming from almost one hundred different countries. The upcoming Annecy Festival in hybrid virtual/physical edition, set to run June 14-19.

As far as short films in competition are concerned, 44 were in the Official, 8 in the Off-Limits category, 22 in the Perspectives section and 12 in the Young Audiences section, of which 43% were directed by women.

Coming to Graduation Films, there were 47 films, of which 60% were directed by female students.

The Feature Films and VR Works in the Official Selection will be unveiled later.

Marcel Jean, Artistic Director, said, “There’s no surprise to find that the 2021 selection of short films is marked by themes and questions linked to the pandemic. Festival regulars will be pleased to find several familiar names competing: Franck Dion, Joanna Quinn, Jalal Maghout, Joan Gratz, and Georges Schwizgebel…. Some may also be surprised to see the Inuit filmmaker Zacharias Kunuk, winner of the Caméra d’or at Cannes in 2001 for Atanarjuat, among the directors in the selection at Annecy.

Jean added: “Several of the graduation films are rooted in modern times, through concerns about new technologies, artificial intelligence and in general about humans’ place in the world. These anxieties find an equivalent with the technologies employed: digital 3D, video game engines, new images, etc.

A few words about the commissioned films to highlight the high standard of the music videos’ selection allowing us to discover filmmakers who have already won awards at Annecy: Nina Paley, Mirai Mizue, Martina Scarpelli, and more.

Lastly, the 2021 selection gives pride of place to African animation with works from South Africa, Ghana, Egypt and Kenya, and it once again testifies to the immense diversity from this continent. While, on all the sections so far, we have selected films from 53 countries, including Armenia, Azerbaijan, Belarus, Macedonia and Pakistan.”