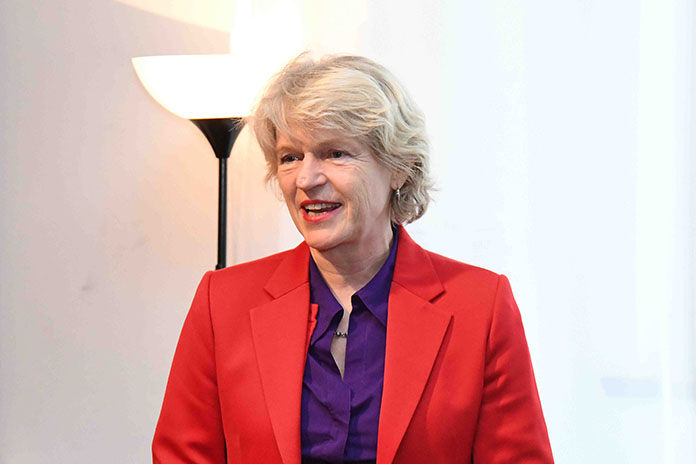 Cinema as an Art Form Will Survive: Dorothee Wenner

We are living in times of dramatic changes – and I guess the only way to move forward is to analyze changes without fear, analyze regional and cultural specifics of filmmaking and audiences, says Dorothee Wenner, delegate and South Asia programmer to the Berlin International Film Festival

International Film Festival of India (IFFI) is marching towards 50th anniversary in 2019. What has been your experience at IFFI?

It is a highly important meeting point for international and Indian film professionals alike, and I really enjoyed the Goan flair whenever I attended in past years. However, the timing of IFFI is tough for us Berlinale programmers, as main selection screenings are ongoing at home and most of our research needs to be done before IFFI takes place – our deadline is October end.

For over a decade, year after year Berlinale has been on a discovery spree of Indian films and directors and you are part of discovering talent. Your views…

My Bombay-based colleague Meenakshi Shedde and I work nearly the entire year, trying to get an overview of what is under production. It is an extremely work-intense enterprise trying to get a picture of what is going on. In India, only very few official organizations exist which support our work in comparison to countries like Korea or Argentina. The effects can be frustrating, but also very rewarding, as I’m discovering every year a number of films by filmmakers I have never heard of; I see films about topics, areas I never knew they existed… The bottomline is that the tremendous passion for cinema and filmmaking in India is what drives me. To my knowledge, it is unsurpassed by any other region in the world.

Do you see visible changes in the independent Indian cinema? What are your views on new narratives among the current generation of filmmakers?

Yes, I do see changes. Presently, many more independent films deal with political and social changes ongoing in India; the remote areas are coming to the fore in terms of attention. Violence, the class divide and religious tensions are depicted in many more movies than a few years ago. Also, I noticed that the new generation seems to be more at ease, more daring in experimenting with new cinematographic languages and expressions.

There are 2,000 films that are produced in over 20 languages in seven film markets in India. What needs to be done to bring structural changes in the Indian cinema ecosystem to identify cinemas of India?

That is a big question and a proper answer would fill a book. To start with, I think cinemas in India should be supported by a cultural understanding and a force that allows looking at filmmaking not solely as a commercial business. There’s a need for non-commercially (or: not solely commercially oriented) niches to develop and prosper new ideas, formats and new audiences. Especially, the current distribution system is suffocating and would need structural support to become more diverse.

Do you think India needs to create institutions equivalent of what other countries have in film space?

What I’m desperately waiting for are alliances of independent filmmakers which create official bodies strong and big enough to represent their impact and voice their demands in the larger field. If the new institutions would be modelled accordingly – yes, that could make a difference.

India has co-production treaties with 14 countries in audio visual space. This tool has been rarely used and less than 10 films have been co-produced in last one decade. How do we change this? Do you think the new generation of filmmakers can make use of this if the scope of co -production is expanded to news screens (mobile, OTT)?

Looking at the production realities of Indian filmmaking, it is the smaller and medium budget productions which are most likely to venture into successful international co-productions. And yes, I do think this model could have a very stimulating effect on the Indian industries overall. To get there, screenplay writing and project development would need to get more attention; more support. And often: simply more time.

With companies like Amazon, Netflix and Google driving cinemas across geographies, how do you see the future for cinemas?

I’m a cinephile and convinced that cinema as an art form will survive. Having said that, I’m very aware that we are living in times of dramatic changes – and I guess the only way to move forward is to analyze changes without fear, analyze regional and cultural specifics of filmmaking and audiences. It is a political, cultural and economic responsibility to keep local, regional cinematographic infrastructures intact – not only by protecting existing realities, also by being inventive in looking for new forms of collaboration, innovative financing, by experimenting with films’ exhibition and of course: new models of audience building. Amazon, Netflix and Google have become extremely powerful players, initially only due to their financial capacities – but it is not money alone which creates good cinema. Until very recently, I think a lot of people in the industry were in kind of a shell-shock by the pace the Silicon valley or digitization are transforming the industry – I’m not excluding myself. But over the past few months, I’m very pleased to see that the awareness to come to terms with the new realities, mainly by developing counter-strategies to the new capitalist super-powers has gained momentum. Not to be misunderstood: I’m full of admiration for some of the films, series of lately produced by Amazon, Google, Netflix. It’s just their tremendous strive for a total market domination which I detest – and which in my view needs to be tackled.

This is crucial time for Indian filmmakers and producers planning to attend Berlinale and European Film Market. Please give few dos and don’ts on preparing for Berlinale?

Berlinale is not a last-minute-destination: usually it works much better if you make your schedule in advance.  Define what you want to achieve at the festival and make a strategy accordingly before you leave. Team up with colleagues, friends who’ve been to Berlinale before. Book your accommodation now. Bring warm clothes and shoes; go to the gym to be fit once you arrive. If you don’t have a next project to take care of: Berlinale is a perfect destination for film buffs eager to see as many films as your body/brain allows in 10 days – it can be totally rewarding and time of your life!