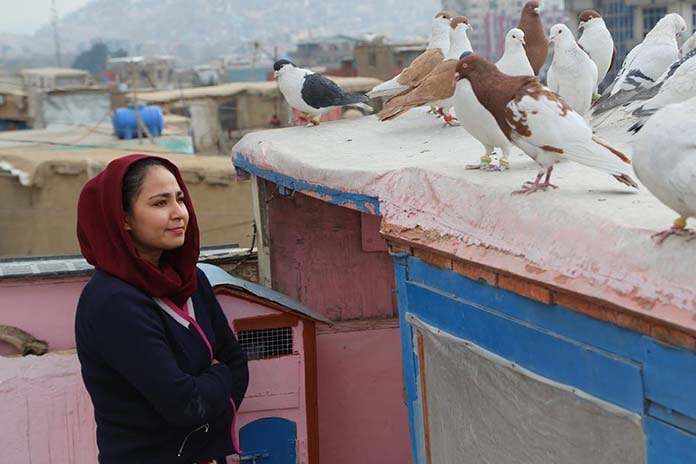 Afghan film “Hava, Maryam, Ayesha” produced by filmmaker Sahraa Karimi has made its way to the 76th Venice International Film Festival in the Orizzonti section (Horizons) is a section of the Venice Film Festival’s official selection

Filmmaker Karimi said “Hava, Maryam, Ayesha” tells the story of Afghan women suffering from different incidents, including explosions and bombings, in the country. “As a female filmmaker from Afghanistan, I promised myself to be the storyteller of my fellow countrywomen who seek to change their lives in a traditional society. By travelling to many Afghan cities and villages, I found real stories from inside my country about women such as Hava, Maryam, and Ayesha,” says director Sahraa Karimi, as she talks about her venture Hava, Maryam Ayesha.

The first independent Afghan film entirely shot in Kabul with director, actors, and actresses living in Afghanistan is about three Afghan women from different social background.

Born in 1985, Sahraa Karimi comes from the second generation of Afghan refugees in Iran. At the age of fifteen, she played as an actress in two Iranian films which brought her to study cinema in Slovakia and graduated with a PHD of directing. During these years, she has made more than 30 short fictions and documentaries, some of which won numerous awards in International film festivals.

After 10 years of making many shorts and documentaries, she returned to Kabul. She made two documentaries there which were successful internationally and were broadcasted through ARTE France and BBC. Hava, Maryam, Ayesha is her first feature film which was shot entirely in Kabul with Afghan actors.

Giving interesting details about the lead characters, she says, “Hava is the example of an Afghan housewife, Maryam is an intellectual and well-educated woman, and Ayesha is a teenager from the middle class. They are trying not to give in to the imposed patriarchal society. Their decision is a form of resistance to their predetermined life. My goal is to narrate the lives of the women who haven’t had a voice for many years, and they are now ready to change their fate. “

The film’s synopsis goes like this: “Three Afghan women from different social background, living in Kabul, are facing a big challenge in their lives. Hava, a traditional pregnant woman whom no one cares about, is living with her father and mother in law. Her only joy is talking to the baby in her belly. Maryam, an educated TV news reporter, is about to get a divorce from her unfaithful husband, but finds out she is pregnant. Ayesha, an 18-year old girl accepts to marry her cousin because she is pregnant from her boyfriend who disappears after hearing the news. Each of them has to solve her problem by herself for the first time.”

According to the film’s producer Katayoon Shahabi, “Through my frequent participations in festivals around the world, I’ve noticed an emergence of a new generation of talented Afghan filmmakers to which Sahraa, the director of this movie, belongs. After ten years of studying cinema and working on different movies, she moved back to her hometown, Kabul in order to offer an insight into Afghan society.

When I met Sahraa for the first time and saw her documentaries in Antalya 2016, what grabbed my attention was that she had managed to bring together western techniques of cinema (she has a PhD of cinema from Slovakia) and her Afghan identity that made her film authentic and honest.
She was determined to make her first feature film in Kabul with the money that she had been saving during many years of work, by using local actors and despite security risks that could put her life in danger.

Witnessing her dedication as well as her crew’s to make this first independent film, I was determined to do what I can to finish this film and help it to be seen worldwide by as many people as possible.”