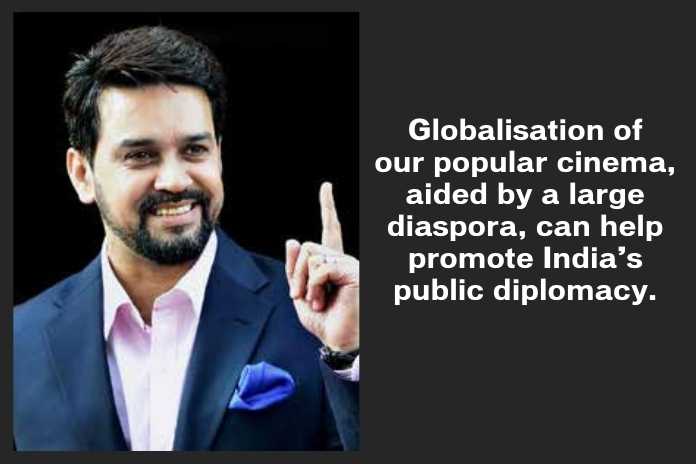 Through the Lens of a Changemaker

Since depiction of one’s culture is a very strong component of any country’s soft power, Indian cinema can play a significant role in the nation branding initiative, says Union Minister for Information and Broadcasting Anurag Singh Thakur, while emphasising the country’s potential to become the world’s content sub-continent

Union Minister for Information & Broadcasting Anurag Thakur has said that Cinema, as a soft power, can play a major role in nation branding initiatives. “Indian film industry and the government today recognize the potential of culture at the highest level. Depiction of one’s culture is a very strong component -of any country’s soft power,” he said.

Speaking at the recently concluded twoday seminar on ‘Indian Cinema and Soft Power’ in Mumbai, the Minister went on to say that a country’s ability to make itself appealing in a global market for ideas has become an important aspect of contemporary international relations. “Cinema can play a significant role in this by focusing on nation branding initiatives,” he added.

The Minister noted that rapid liberalisation, deregulation, and privatisation of the media and culture industries have transformed the Indian film industry in recent decades, while the expansion of global digital media industries and distribution technologies has ensured that Indian entertainment channels and films are increasingly visible in the global media space.

Speaking about the growing global popularity of Indian cinema, Shri Thakur stated that “today Hindi films are released simultaneously across the globe and its stars are recognised faces in international advertising and entertainment space.”

“Our films and music have captivated even the most remote African countries.” We know about countries like Nigeria, where the Nollywood market is heavily influenced by Indian cinema; Bollywood has also expanded into uncharted territories such as Latin America; and our cinema is making inroads into countries such as South Korea, Japan, and China,” he added. 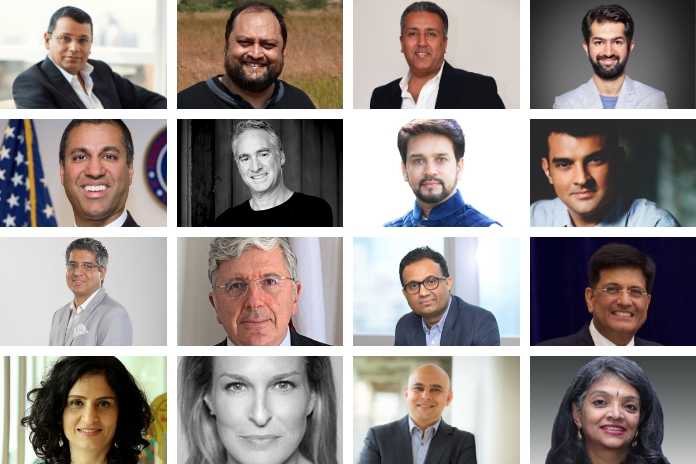 Whether one likes it or not, India will soon have level playing field in policy and regulations for the media and digital platforms. This is very clear from signals left by policymakers in various sessions. After years of dilly-dallying, there will be light touch regulation beyond the self-regulation call by the industry.

Many in the industry don’t want regulation (specifically on content) in the OTT space. However, they have no issues with regard to investments, protection of investments, piracy and digital platforms.

Industry leaders estimated that Media and Entertainment Sector in 2020 will shrink to $15 billion from $20 billion in 2019 because of COVID-19. Around 20% of workforce may lose jobs, impacting nearly a million people.

The film, television and online video services industry in India generated a total economic contribution of $49.8 billion and 2.6 million in 2019, says a report by Deloitte, Producers Guild of India and MPA. The report indicates a growth of 61% in these sectors.

The demand for content streamed via OTT is increasing day by day in India. Today, India ranks number two in digital video consumption in the world. With 8.43 hours of consumption per person per week, the second-most populous country is way above the global average of 6.8 hours. Can you imagine Amazon Prime has reach in 4000 towns and cities in India?

Sixty per cent of video streaming worldwide is on mobile devices. The game changer for the media and entertainment sector in the coming days will be 5G. Also, mobile and video gaming will be a huge market in coming years.

The Indian M&E industry is the biggest in the world by output, with over 5 lakh hours of television content made every year, 80,000 newspapers published daily, and more than 2,600 feature films produced each year – 98% of all these outputs are shaped and made in India.

Businesses will have to develop consumer trust in brands, as “trust” will play a major role in post pandemic world. This will require businesses to build social platforms based on freedom of speech.

To accelerate filmmaking and fillip to the Indian media and entertainment sector, Government of India is coming up with incentives in all sectors, including TV serials, filmmaking, co-production, animation and gaming.

It is not OTT versus cinema theatres. But OTT and theatres coexist together. Some of the biggest proponents of OTT are waiting to watch movie in big screen. And Christopher Nolan’s Tenet is their first choice.

Unlike a few countries like the UK, which has done a $ 1.5 billion to the creative sectors, India as a country might not be in a position to do so at this point of time. Indian M&E industry sought help from the government to provide access to capital. The organized verticals within the media and entertainment industry require capital today.

The actors and technicians still don’t feel safe to come on board for shooting. Everyone wants to make a creatively good product. So when we are working on a film, if the creativity quotient is removed and are only constantly worried about sanitization and other stuff and your whole mind is of that, then you will not creatively come out with a great product.

There’s no doubt today that Indian cinema is India’s soft power and that our films are seen in over 100 countries. Thanks to OTT platforms like Netflix and Amazon Prime, it is instantly visible and experienced now.

While Indian content reaches 100 countries with streaming platforms, smaller countries like South Korea, Israel, Turkey have bigger media businesses with their content travelling globally. Indian films and TV dramas do not travel globally because of the ambitions set are small. The immediate priority is to focus on India’s content to be consumed globally. 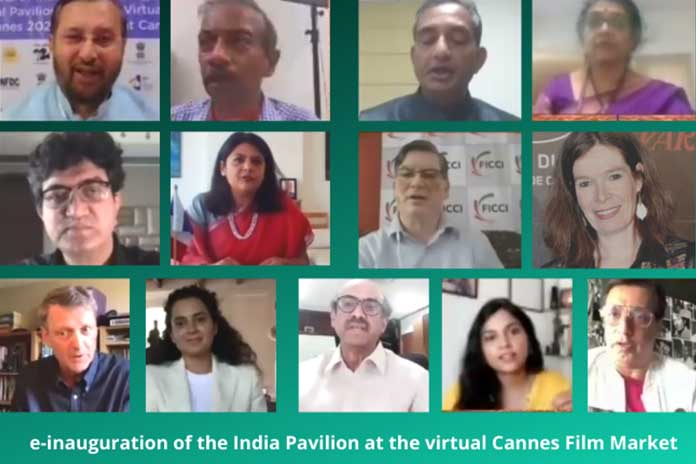 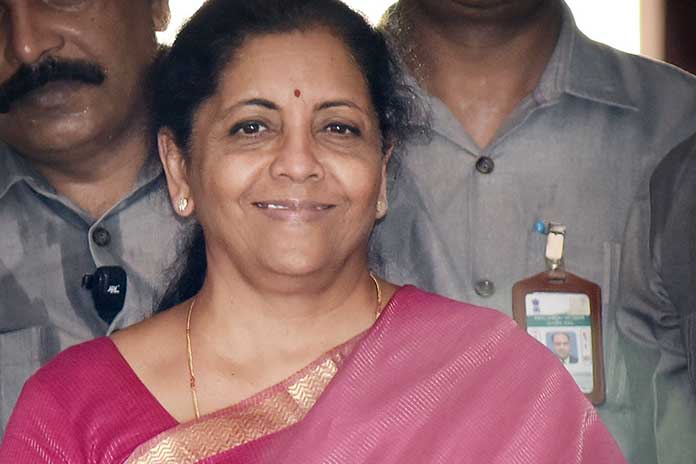 India’s soft power was the spotlight of Finance Minister Nirmala Sitharaman’s maiden budget speech but India’s showbiz and films did not find a place in her speech on India’s growing soft power.

The FM highlighted that artists in 40 countries sang Mahatma Gandhi’s bhajan “Vaishnav Jan To, Tene Kahiye Je”. “Bharat ko Jaano” quiz competition is not only a hot favorite of Non-Resident Indians but also foreign participants. Sitharaman also spoke about the mission to help traditional artisans and their products in global markets and expand global footprint.

In her speech, the Finance Minister also mentioned the development of a digital repository focusing solely on preservation of tribal cultural heritage — folk songs, photos, and videos regarding their evolution, place of origin, lifestyle, architecture, traditional art, folk dances and anthropological details of the tribes in India.

But it was puzzling why Indian cinema’s global footprint did not find a mention in the speech by Finance Minister as the country’s soft power.

There is a steady growth in the visibility, volume and cultural visibility of India — from Bollywood to Bhangra music. India has revolutionized in the production, distribution, and consumption of images and ideas.

Indian films are exported to over 35 global territories. China alone accounted for a $272 million box office collection for 10 Indian films in 2018.

The warm-up to any bilateral discussion or any business meeting with Indian corporates begins with an Indian film narrative.

Shah Rukh Khan is known to bring traffic to a halt in the streets of Berlin (during Berlinale). Aamir Khan is now officially the most famous international star in China. Even today, Rajinikanth is a cultural phenomenon in Japan, where local fans dubbed him ‘Dancing Maharajah”.