Amidst the challenges posed by the global pandemic over the past two years, the American Film Market will be going virtual from November 1 to 5 on its proprietary interactive campus AFM 2021 Online which was built in 2020 for the second year in a row. As the opening of the last major global film industry event on the 2021 calendar, which is produced by the Independent Film & Television Alliance kicked off on a bright note, Jonathan Wolf, Managing Director, American Film Market, tells Vivek Ratnakar and Natarajan Vidyasagar, Pickle in detail about major challenges and what participants can look forward to in this edition.

The American Film Market is being organized online second year in a row. How has been the response and what can participants expect from this edition?

The AFM virtual platform will be presenting an engaging and effective environment for discovery, education, deal making, networking and reconnecting. More than 300 production and sales companies, as well as international trade organizations from 25+ countries have already registered as exhibitors for the market.  AFM will also bring its distinguished Conferences and educational programming back online with two stages running simultaneously and featuring more than 50 live sessions exploring film topics from script to screen. The sessions will also be made available the same day on-demand for attendees to stream at their convenience.

Over 150 industry professionals and decision makers will participate in AFM 2021 Online’s programming lineup.  Over five days, 7,000+ professionals from 70+ countries will access the entire global catalogue of available films and projects, attend world class conferences, and connect with decision makers.

What are the new features added in this year’s edition?

As far as new session highlights are concerned, AFM 2021 Online will feature a story analyst’s approach to screenwriting, focus on Animation as a growing territory for independents, and sessions like Black Filmmakers at the Crossroads to Success (presented in partnership with AAFCA), Bridging the Production Insurance Gap, The Casting Effect: How Talent Choices Impact Every Phase of Production, International Film Market: Consumption of Black Culture, Rejection of Black Stories (presented in partnership with NAACP)and New Perspective on Horror.

In addition, AFM has announced its lineup of eight Premiere Sponsors.  The sponsors, each of which will present a dedicated location on the AFM 2021 Online campus, include Apojo Publications, Entertainment Partners, Filmhub, Honolulu Film Office, JAPAN/JETRO, Media Services Payroll, Polish Film Institute, and Whip Media.

How will you make sure that the virtual platform would serve AFM’s diverse constituency?

The AFM is the most efficient film acquisition, development and networking event in the world. Over US$1 billion in production and distribution deals are closed every year — on both completed films and those in every stage of development and production. The pivot to online would allow for all stakeholders around the world to participate in the market. It offers a good opportunity for people to explore different ways of accessing people. Only about a third of AFM’s participants are buying and selling. The other two-thirds are part of the production community. There are producers, writers, film commissions, lawyers, bankers, sales agents and those who provide production facilities. So, the platform was created so as to make sure that we could serve that diverse constituency.

AFM is known for handholding and supporting global independent film makers. What can they expect to gain from this virtual edition?

Tell us about major challenges that the global pandemic has posed for independents and how does AFM plan to help them reconnect?

The challenges posed by streaming platforms, exacerbated by the global pandemic over the past two years, have been formidable for independents. However, despite the tumult of paradigm-shifting moves by monolithic media corporations, the ingenuity and experience of independent buyers, sellers, producers and financiers of all sizes has, by and large, enabled them to survive.

AFM 2020 showed us that how a crisis can be converted into an opportunity. At a time when the world is gripped by Covid-19 pandemic, American Film Market was conducted in a successful manner by taking the virtual route. AFM firmly believes that for the resilient independents who are willing to look for the best talent and scripts and find innovative ways to attract actors and directors, human connection is critical, even if that means meeting people virtually thousands of miles apart on a laptop.

AFM 2021 is being organized at a time when there is still uncertainty about when theaters around the world will open. How will you address this challenge?

We are optimistic that theaters will be open around the world by at least mid-summer. A lot of the business that’s done at the AFM is done on films that haven’t started shooting yet. So the business is really about films for a year from now. And so I expect to see a lot of business taking place. 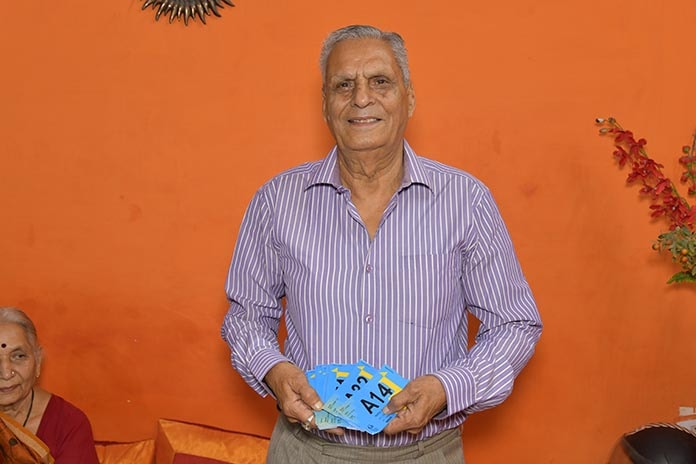 Brij Bhushan Chaturvedi, popularly known as ‘BBC’, was a permanent fixture at 47 of the 49 past editions of the International Film Festival of India. No edition of IFFI could be called complete without him in attendance. Now 82, he continues to eat, sleep and live cinema as excitedly as he did decades ago when IFFI was first conceived. As a person, who has been there and seen it all, he talks about how India’s premier film festival has evolved over the years
By Vivek Ratnakar

What started as an engagement to satiate the teenage curiosity and amusement has turned into the passion of a life time for Brij Bhushan Chaturvedi, who was rechristened as ‘BBC’ by none other than Dr Ramanand Sagar around 66 years ago in Chennai for his immense dedication to cinema. Chaturvedi, now 82, who went on to make a name for himself as a noted film critic, recalls how his first fascinating encounter with the world of cinema, the first International Film Festival of India held in Mumbai in 1952.

“I was just a beginner in film industry. There were two film distributors in my native city of Indore at that time — Kali Film Exchange and Jain Film Exchange. It was these people who brought me to Bombay with them for the film festival. I was basically working for them like a coolie. I attended the festival and watched about 22 to 24 films. The Festival in Bombay was organised by the Film Division. I was amazed by the international films that were showcased there.”

The life story of Chaturvedi itself is nothing less dramatic than a movie. He started off as a newspaper hawker in Indore at the age of 10 and would often be seen doing odd jobs like cleaning and distributing books at the Mahesh Public Reading Room and Library at Bada Sarafa in Indore. At 13, he took up a job at Jyoti Talkies in the city, which required him to do multitasking as a gatekeeper, booking clerk, supervisor and assistant manager. He also recalls his brief stint as a manager at Neelkamal Cinema (earlier known as Diamond Talkies) in Indore.

Some people complained that Goa is far away, is costly and lacks film culture. But Parrikar insisted on having it in Goa, and today some 2000-3000 entries come to IFFI in Goa out of which some 500 are selected for screening. Goa has truly developed as Film Festival destination

Though Chaturvedi started writing on cinema way back in 1951 and it always remained his first passion, he went on to successfully pursue a teaching carrier from 1960 onwards retiring as a vice-principal in 1997. But what remained a constant in his life was the love for attending Film Festivals. No matter where the Film Festival was organised, he would always make sure to attend it.

“After Bombay, IFFI was organised in Delhi in 1961 and then subsequently in 1965, 1969, 1974, 1976 and 1978. Then the Festival came to Chennai, Bangalore, Thiruvananthapuram, Calcutta and Hyderabad. The PIB people came into picture in 1965. Before that only limited people were given invitation card to attend the Festival. So, more and more people started to attend IFFI. Earlier, only 22-24 movies were shown at the Festival but subsequently the number of participating countries was increased considerably,” says Chaturvedi, who has seen who’s who from the cinema world from many countries–all thanks to IFFI.

On how IFFI has evolved over the year, the veteran film critic says that in 1965 it was a 15-day Festival, which was subsequently reduced to 11 days. “But from 2004 onwards the Festival duration came down to nine days in Goa. Manohar Parrikar and Sushma Swaraj took the decision that the Festival should not be rotated and Goa was fixed as a permanent venue. The first festival was organised so well that its memories are still fresh in my mind. Some people complained that Goa is far away, is costly and lacks film culture. But Parrikar insisted on having it in Goa, and today some 2000-3000 entries come to IFFI in Goa out of which some 500 are selected for screening. Goa has truly developed as a Film Festival destination.”

There is hardly any person who can boast of watching at least 5,000 movies at various film festivals in India. Out of 49 editions of IFFI, Chaturvedi has attended as many as 47. Till date, he has participated in 62 film festivals and attending the 50th edition of IFFI will be his 63rd one

Chaturvedi, fondly known as the ‘Man of Festivals’, used to write for newspapers like Indore Samachar, the first published newspaper from Indore; Agni Ban, Bhaskar, Nai Duniya, Jagran and Rajasthan Patrika, among others.

There is hardly any one person who can boast of watching at least 5,000 movies at various Film Festivals in India. Out of 49 editions of IFFI, Chaturvedi has attended as many as 47. Till date, he has participated in 62 film festivals and attending the 50th edition of IFFI will be his 63rd one, he says. Covering Film Festivals, Chaturvedi has met and interviewed many luminaries from the world of cinema including Satyajit Ray, Mrinal Sen, Raj Kapoor, Arun Gopal Krishnan, Prahlad Nihlani, etc.

One change that has happed lately, and which Chaturvedi regrets, is that many prominent personalities from the film industry now prefer to stay away from the Festival. “When it used to happen at Vigyan Bhawan in Delhi, actors like Om Puri, Shabana Azmi, Smita Patil, Shyam Benegal, and Naseeruddin Shah were part of the Festival. But now due to lack of facilities for them they are staying away from it. Also, Presidents and Prime Ministers used to address the film fraternity at the Festival, which has all changed.”

He also recalls that even during the 1965 Indo-China war, the Festival did not lose its shine and was as glamorous as it was in the previous editions. “When Bandit Queen was screened at Siri Fort Auditorium, the show was house full even though it was raining heavily outside. Another film titled Mika was screened in Vigyan Bhawan and people broke the doors to watch that film,” says Chaturvedi emphasizing on the popularity of film festivals in India.

IFFI has also played a crucial part in inspiring Indian Film talent to learn from International Cinema. “Now we have come to a stage where we are getting inspired by the stories coming from our own regional cinema.”

At the ripe age of 82, Chaturvedi still carries the same zeal to attend every Film Festival. He says he even dreams films when he is asleep. For him, “life is cinema and cinema is life.”