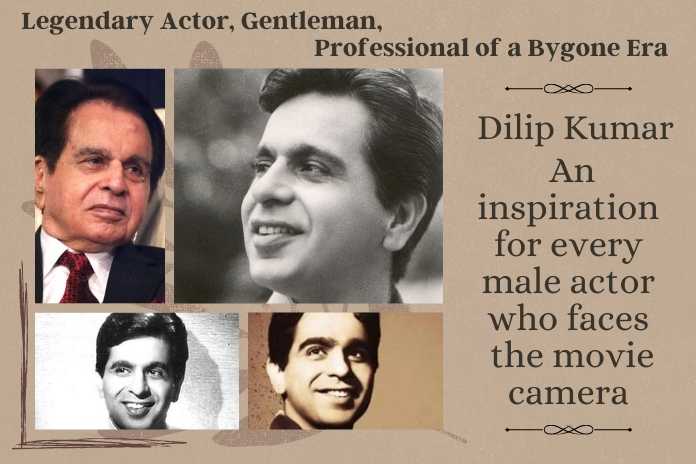 He had no peer. Dilip Kumar, who passed away on Wednesday at the age of 98, was one of the finest film actors the subcontinent has ever seen. With an active Hindi cinema career that spanned over five decades, he built a fan following on both sides of the India-Pakistan border. As a showbiz icon, he shone as bright as anybody ever has.

Dilip Saab or Yusufbhai, as an ever-admiring Mumbai industry addressed him, broke away from the theatrical style of acting that was popular in his time and developed a mode perfectly suited to the movie camera. Acting in Hindi cinema prior to Dilip Kumar’s advent was rooted in Parsi theatre and various Indian folk forms. He gave it a modern, sophisticated veneer.

Dilip Kumar will, therefore, always remain an inspiration for every male actor who faces the movie camera. Bollywood is today dominated by stars trapped in their own limited bandwidth defined by their individual mannerisms. They can only play themselves on the screen. An actor like Dilip Kumar would have been as asset worth his weight in gold in this era of mediocrity. He set a benchmark so high that Hindi movie actors of our time can only dream of touching it.

His father was a fruit merchant who owned several orchards in Peshawar. Little would the patriarch have known that his son, born Yusuf Khan in 1922, would be his life’s most lustrous fruit. He was in his teens when the family migrated to Mumbai.

Within years, Dilip Kumar made his first moves as an actor. He made his debut in the Bombay Talkies production Jwar Bhata (1944), directed by Amiya Chakravarty. As he delivered hit after hit in the 1950s and 1960s – Andaz, Jogan, Aan (the first Hindi film to receive wide commercial distribution in the West), Daag, Footpath, Amar, Devdas, Madhumati, Leader, Mughal-e-Azam, Ganga Jamuna and Ram Aur Shyam, a range of films that revealed his awe-inspiring versatility – his name became synonymous with perfection.

No Hindi movie actor has scaled the heights that Dilip Kumar did at the peak of his career. It was his mastery over understatement that set him apart. His dialogue delivery was marvellously measured and his emotional pitching so right that he never seemed to be acting. Many Mumbai actors have sought to imitate him but none has ever managed to replicate his magical effortlessness.

In the 1950s, Dilip Kumar was part of a remarkable triumvirate (with Raj Kapoor and Dev Anand) that gave Hindi cinema some of its greatest ‘golden era’ hits. He shared screen space with his two great contemporaries once each – with Raj Kapoor in Andaz (1949) and with Dev Anand in Insaaniyat (1955) – and proved to the world that he was in a completely different league.

Almost three decades later, playing dad to Amitabh Bachchan in Ramesh Sippy’s memorable Shakti (1982), he demonstrated that age had not dulled his instincts. In fact, the films that he featured in after a five-year hiatus in the late 1970s following the failure of B.R. Chopra’s Dastaan and Asit Sen’s Bairaag, demonstrated that he was, like fine wine, only getting better with age.

His later films – Vidhaata, Mazdoor, Mashaal, Karma and Saudagar, the last-named pitted him against the notoriously temperamental Raaj Kumar – are cases in point. Saudagar, directed by Subhash Ghai in the early 1990s, was the last major hit of Dilip Kumar’s glittering acting career. His final big-screen appearance was in the 1998 film Qila in which he, as he often did, played a dual role.

Although Dilip Kumar was known as the ‘Tragedy King’ all through his career, he had a flair for lighter roles too, as films like Aan, Azaad and Kohinoor established beyond doubt. But no matter how you look at his life and work, three films that will figure on every classic Hindi cinema list are Naya Daur (1957), Mughal-e-Azam (1960) and Ram Aur Shyam (1967). The three performances bear testimony to Dilip Kumar’s phenomenal adaptability as an actor.

In Naya Daur, he was a villager. In Mughal-e-Azam, he transformed himself into a Mughal prince. And in Ram Aur Shyam, he played the double role of two brothers, one a simpleton and the other a man about town.

Each of these four characters had a distinct timbre to it. Only Dilip Kumar could have etched out four figures so unlike each other in the span of a decade without letting the strain show for a single moment.

It is important to ask why Dilip Kumar will continue to be relevant in the foreseeable future. The answer is obvious: he was one rare Hindi movie actor who blended popular appeal with creative gravitas whether he was playing the lead in a swashbuckling entertainer or the tragic hero in an intense drama. He could move from one mode to the other with stunning ease. Above all, he embodied the polish and refinement of a gentleman and a professional of a bygone era.