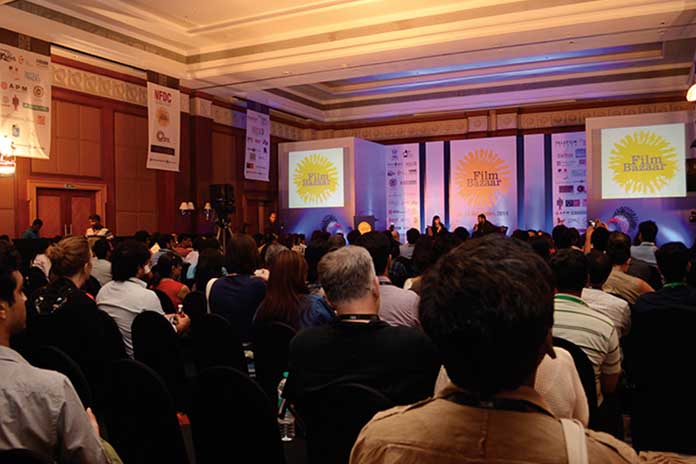 NFDC organises the Film Bazaar from the 20 – 24 November, every year at the Goa Marriott Resort. South Asia’s global Film Market, the Film Bazaar is a platform exclusively created to encourage collaboration between the international and South Asian film fraternity.

The Bazaar is focused on discovering, supporting and showcasing South Asian content and talent, in the realm of filmmaking, production and distribution.

A converging point for film buyers and sellers from all over the world, the Bazaar also aims at facilitating the sales of world cinema in the South Asian Region.

Film Bazaar has evolved into a one-stop shop for filmmakers, producers, sales agents, distributors, film festival programmers and financiers from around the world; a marketplace that encourages collaboration between the South Asian and international film fraternities.

The Co-Production Market is a platform for curated projects with South Asian themes to find financial and artistic support.

Every year, filmmakers with projects selected for the Market get numerous avenues to connect with Indian and international producers, distributors, sales agents and financiers active in the field of co-production.

Since 2007, the Co-Production Market has consistently brought out notable projects.

In 2018, the market showcased 19 South Asian projects from 7 countries.

■ Project must have both director and producer attached

■ Project must have 25 per cent of the finance in place

■ Projects that have started principal photography are not eligible

The Knowledge Series consists of specially curated presentations, lectures and panel discussions with key decision makers and market drivers of the film industry.

Over multiple sessions during the four days of Film Bazaar, the Knowledge Series covers a wide range of topics including (but not limited to) the evolution of content through changing socio–economic structures, expanding genres, conventional and innovative platforms of distribution, various emerging co-production possibilities, international collaborations and treaties, and the art of navigating various film festivals and markets.

The films are viewed on individual computer terminals in private booths via a specially designed Viewing Room software. Film programmers, distributors, world sales agents and investors can watch complete films as well as films that are awaiting completion. They can access details about the respective projects as well as contact the filmmakers through this software.

To create a more user-friendly experience, viewers can choose to view the films on the basis of parameters like duration, language, stage of completion, type and festival history among others. Investors can also choose to view films which have applied specifically for finishing funds.

■ The films can be of any length and genre

■ The last date of submission of completed applications is September 16, 2019

Since Film Bazaar is attended by directors, producers, financiers, distributors, sales agents and film festival programmers from across the world, Film Offices is a great opportunity for Tourism bodies to connect with the Indian and International film fraternity. It brings to filmmakers the world of picturesque locations from across India, that would fit into their scripts and add value to their films. The aim is to ensure that the Film Offices are able to pitch their locations to all leading filmmakers.

The Film Offices connect the State Governments with industry stakeholders such as Indian and International Producers, Indian Directors and Industry Executives from India and abroad, through structured meetings and participation in the Knowledge Series. The States through their Film Offices, highlight their film policy and their endeavor to make filming a smooth affair, showcase their locations and acquaint the filmmakers and the fraternity about the incentives/rebates/subsisdies offered for filming in their respective jurisdictions. The Industry on the other hand, gets an opportunity to sensitize the State Governments with regard to the to the needs of the film industry, the various challenges faced by them during filming in locations and the consequent economic impact that film shootings have on the local economy.

This initiative, is in collaboration with the Film Facilitation Office and is of mutual benefit to both the filmmaker and the State.