As the COVID-19 pandemic has brought in major disruptions in the M&E business model, it is high time for the sector to forego holding on to old ways of thinking and working, and prepare to engage with the world with a new set of rules to propel growth, says the latest edition of FICCI-EY Report on Indian M&E sector

The COVID-19 global pandemic presented unprecedented challenges to the media and entertainment industry worldwide. Faced with isolation, consumers actively sought alternatives to keep themselves entertained. Thus, 2020 saw demand patterns shift with acceleration in digital media adoption aided by the growth of digital infrastructure. The supply side transformed, too, as M&E companies took the opportunity to reinvent.

“This altered the M&E sector as we knew it. Every segment – TV, radio, print, digital, etc. – had video, audio, textual and experiential products and had begun to redefine itself across those verticals. What didn’t change, however, was the compelling content created around news and escapism, and the passion to build some of India’s most powerful brands,” says Ashish Pherwani, M&E Sector Leader, EY India.

EY India in collaboration with Federation of Indian Chambers of Commerce & Industry, has come out with the 2021 edition of the FICCI-EY report on the Indian media and entertainment (M&E) sector—‘Playing by New Rules’—that seeks to capture transformation of the country’s M&E sector and offer useful insights into the new rules of the game.

According to Pherwani, appointment viewing on news television, gamification on e-commerce apps, circulation transformation in print companies, short video on OTT platforms, interactivity and brand solutions from radio companies were some of the many strategic shifts that were seen in 2020.

Saying that India’s diversity and scale will continue to fuel the growth of traditional media, Sanjay Gupta Chairman, FICCI Media and Entertainment Committee, highlights the new and big opportunities for M&E businesses.

“Today content creation and storytelling are much more diverse and come from all parts of the country. New distribution models and monetization strategies are evolving across both large and small screens. Learning content and gaming have emerged as very large new opportunities. These changes are driving a shift in monetization of content investments and this opportunity is global,” says Gupta.

The report points out that the Indian M&E sector fell by 24% to INR1.38 trillion (US$18.9 billion), in effect taking revenues back to 2017 levels. However, there were some silver linings as well. “Several digital trends accelerated their trajectory, fed by growth in broadband, personal devices and smart televisions, and the time and inclination to try online services,” observes Gupta.

“Digital and online gaming were the only segments which grew in 2020 adding an aggregate of INR26 billion and consequently, their contribution to the M&E sector increased from 16% in 2019 to 23% in 2020,” the report says.

Online gaming continues to be the fastest growing segment of the M&E sector for the fourth year in a row, the segment grew 18% helped by work from home, school from home and increased trial of online multi-player games during the lockdown.

“Growth was led largely by Disney+Hotstar which put the IPL behind a paywall during the year, increased content investments by Netflix and Amazon Prime Video and launch of several regional language products. In addition, 284 million Indians consumed content which came bundled with their data plans,” says the report.

According to the FICCI-EY report, online gaming will continue to grow and reach 500 million gamers by 2025 to become the third largest segment of the Indian M&E sector. The segment will grow across all its verticals viz, esports, fantasy sport, casual gaming and other games of skill, but revenue growth will be led by mobile-based real-money gaming applications across these verticals.

It continues to say that the pandemic disrupted the already fast evolving M&E sector and new rules have been set in place to drive success of the sector.

It lists out some strategic priorities for the Indian M&E sector including Identifying the audiences that matter, building a multi-media and multi-community strategy, addressing community needs apart from just news and entertainment, make end-customer data and insights the core of operating priorities, building customer acquisition efficiency, enhancing speed of product development and change, and reinventing ad sales.

The report points out that globally the M&E industry is under renovation. “The steps taken by media and entertainment companies to streamline the cost base and optimize the operating model for efficiency and effectiveness will remain on center stage as the entire industry plots a course through disruption,” it says.

It also adds that major business conferences, which moved to virtual gatherings in 2020, will continue to utilize digital platforms to extend reach and include remote participants who remain wary of business travel.

Esports and video games will build on a fan and user base that multiplied in size during the pandemic, believes John Harrison, EY Americas Media & Entertainment Leader. “In 2021 and beyond, companies will be successful not because they are better at predicting the future but because they are better able to orchestrate a wideranging ecosystem of in-house talent and external partners, and pivot in a timely, confident manner,” says Harrison.

Although Indian television segment declined 13% in 2020, the report expects television advertising in 2021 to be close to 2019 levels, growing over 20% to reach INR304 billion. Digital segment, too, is expected to grow to INR424.5 billion by 2023 and digital advertising will outpace all other media with paid subscriptions doubling to over 100 million by 2023. According to Pherwani, in effect it will be the same game, but with totally new rules. 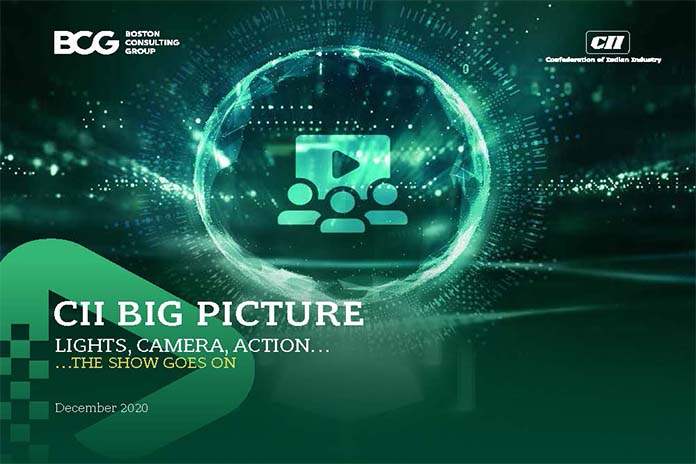 M&E Continues to be a Strong Pillar of Indian Economy

Even as 2019 has been a tough year and businesses across the board have had challenges, Media and entertainment sector continues to be a strong contributor to the Indian economy, said Kanchan Samtani, Managing Director & Partner, Boston Consulting Group-India, while briefing about the CII BCG report on the state of Indian M&E sector that was released during the CII Big Picture Summit 2019.

The report, she said, “talks about what this year has looked like so far. And what are the expectations and what are some of the green shoots, we’re starting to see on the recovery front”. “Media and entertainment sector continues to be a strong contributor to the Indian economy. I think that fact has not changed. As we’ve been discussing over the last two or three big picture meetings, continue to be a set of imperatives, which have changed a little bit this year, on what all stakeholders have to do to continue to grow the sector and realize the full potential,” Samtani added.

Presenting an overview of the CII BCG report, the Managing Director & Partner of Boston Consulting Group-India said that from a consumption standpoint, this year, on the back of the COVID-19 crisis, the one thing that has changed positively for the sector, is there has actually been a spike in terms of the total consumption.

“This has been seen across platform, on digital or television broadcasting. And it’s been universally true, particularly at the start when people stayed home a lot more. But actually, a lot of that spike we expect will also continue going forward,” she said.

Speaking about major drivers of growth, she said that non-primetime viewership has actually been a major contributor to this growth. “OTT has been a major driver of growth, and has also actually seen a lot of growth in the rural and tier 2 and 3 cities from a consumption standpoint. And for the first time in India, on the digital platforms, we are actually starting to see a very meaningful inclination from consumers to pay for content directly on the digital platform.”

According to the report, the pay OTT models have actually started seeing as much as 50 to 60% growth in consumers who are willing to pay for subscription services online compared to the past.

India’s growth story on media and entertainment continues to be very unique, and multi modal, Samtani stated. “What I mean by multi modal is that different forms of media still have not been growing at the cost of necessarily the traditional media, I think what digital has done is added many more use cases for consumption, which didn’t exist in the pre odd pre digital days,” she observed. 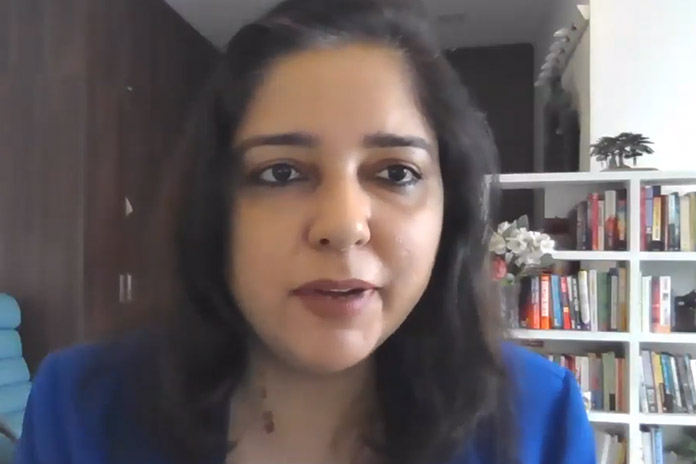 According to the Managing Director & Partner of Boston Consulting Group-India, the growth rate in television consumption is actually continuing to grow in the range of 6-8 percent in some years, while they still continue to grow at more like 15%. “We’ll see other sectors have started to flatten a little bit. But I think overall, our expectation is that this will continue to be a high growth story across the board. And that’ll be multimodal in nature, in terms of the way that it actually takes off in other emerging markets like China, for example, where some of this has also played out in the past,” Samtani predicted.

She also thinks that the M&E Sector has had a tough time this year on the ad spend front, particularly in the first two quarters. However, given the recovery during the past crisis across the world, she is optimistic that the recovery will be faster. “Advertising, at least in the past crisis, has actually seen a V-shaped recovery. Of course, it’s linked to the GDP growth and growth of all the other sectors in the market. But I think the past crises give us some comfort that not just in India, but in other parts of the world as well, advertising has been closer to a V shaped recovery and we can hope to see that here as well.”

According to the CII BCG report, between July and October, Indian M&E sector actually saw 20% increase in AD volume. “Some sectors, particularly durables, food, and beverages, personal care and accessories, really saw a much sharper recovery in the month following the lockdown. Some sectors continue to be very resilient.”

One of the strong growth indicators, the report finds, is in the large number of advertisers utilizing both television and digital media platforms to expand their reach. “We’ve seen as many as 1,300 new advertisers coming up in the last couple of months, and a lot of these earlier have been from education and healthcare sectors,” Samtani said.

Another positive trend the report points out is that the digital advertising has accelerated in 2019. “Most published sources have reported that they expect digital advertising to be maybe 15% by 2022. But we have actually touched this figure and most people have revised their projections and start looking at more like 20% of growth over the next couple of years,” she pointed out.

Samtani attributes this shift to change in advertisers’ behavior. “Advertisers have wanted to target customers more specifically with improved analytics. They have been asking for return metrics and specific ROI calculations which digital has been able to offer to them. And I think that is what has accelerated the shift, along with the consumption shifts to digital platforms at a much faster rate.”