In the MIPTV Preview 2021 Curtain Raiser Edition, MIPTV director Lucy Smith has given a curtain raiser of sorts on what’s in store this year at the much awaited event. “We are looking forward more than ever to bringing everyone together for the best of MIPTV, MIPDoc & MIPFormats online this April.”

The 58th edition of Cannes’ TV market MipTV, set to run from April 12, will be a virtual affair for the second consecutive year. The 2020 edition was also forced to go digital due to the pandemic.

According to Lucy Smith, Digital MIPTV, with its rich content showcases will be your guide to the very best in the new programming. The 7th annual MIPDrama, an exclusive look at the most anticipated series in production around the world gets underway just ahead of the MIPTV week.

This is followed by a series of non-scripted showcases offering a first look at factual programming, high-end documentary and factual formats from the biggest names in the industry.

“And our exclusive Fresh TV sessions even more in demand as the industry looks to the future and adjusts to the effects the past year, we introduce two brand new sessions focussing on young-adult content, esports, podcasts and brands,” says Lucy.

She adds: “We’re also excited to be welcoming for the first time two of the biggest names in global entertainment- David Becham and Marc Anthony- as they turn their focus towards television production and share their ambitions for their studio enterprises.”

The launch of the MIP SDG Award last year, supporting the United Nations’ 17 Sustainable Development Goals, underlines our commitment to galvanising the industry to support social change, she says and adds: “This year we honour A+E Networks president Paul Buccieri, for his company’s outstanding efforts in reducing inequality both in programming and behind the camera.”

She says, “we have designed this year’s MIPTV programme around the elements that we know are most valuable to you: one-to-one matchmaking, networking, conferences and market intelligence, with a sharp focus on doing real business.”

Before signing off, she adds: “We have also learned how much Cannes means to you and that nothing replaces meeting face-to-face to share our love of television.” 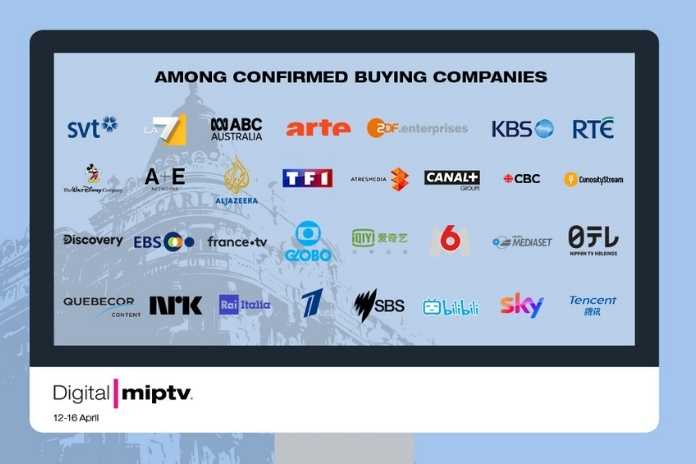 A strong buyer and commissioner demand prevails for Digital MIPTV 2021 for the one-to-one distribution market, the one-to-one international co-production markets and its digital networking platform in a positive early response for this year’s all digital show.

For the first time, Digital MIPTV will connect the MIPDoc and MIPFormats communities as well as drama and kids online via Reed MIDEM’s signature one-to-one matchmaking platform with two unique offers guaranteeing delegates pre-scheduled meeting agendas, with a minimum of 15-20 meetings, to boost distribution, acquisitions, co-production and development.

In addition, a week-long digital pass offers access to the conference programme, highlights of which will include exclusive market insights for all genres including the popular Fresh TV, Glance, high profile keynotes, MIPDrama buyers screenings and the MIP SDG (Sustainable Development Goals) Award.

MIPTV Week will be preceded by pre-market Discovery Showcases on 9 April offering a first look for buyers at hotly anticipated new content. All delegates will have access to the Digital MIPTV networking marketplace from 29 March and all content will be available to catch up online until 14 May 2021.