Composed by AR Rahman and lyrics by Prasoon Joshi, the Covid-19 anthem was a tribute to Covid warriors released by HDFC Bank Resurfaces in Social Media

#Hum Haar Nahi Maanenge, a motivational song by Oscar-Grammy winning musician AR Rahman and lyricist Prasoon Joshi, that gave a musical tribute to the nation’s fight against Covid-19 last year, is now all over the social media.

With the second wave hitting the country hard, people have been sharing the anthem on social media and it has gone viral once again. Launched on 1 May 2020, the video has garnered 19,636,857 views so far.

Composed by AR Rahman, the anthem had been sung by various Indian artistes along with Rahman. This was a song supported and released by HDFC Bank who promised to contribute Rs 500 to the PM-CARES Fund every time the official video gets shared. 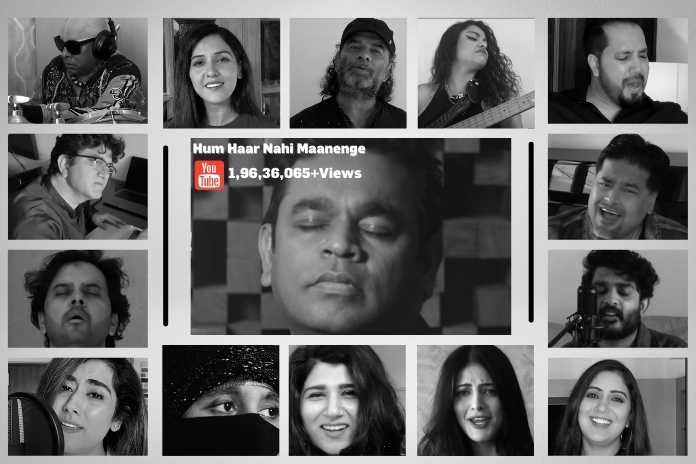 Talking about the initiative, Rahman had said, “This song has brought all of us together for a noble cause and we hope it inspires the nation to come together too.”

During the release time, HDFC Bank said that the song was conceptualized as a clarion call to spread hope, positivity and motivation. The powerful, emotional track reminds people that we are in this together and we will get through it together.

The track had brought together an ensemble of musicians from all over India. Clinton Cerejo, Mohit Chauhan, Harshdeep Kaur, Mika Singh, Jonita Gandhi, Neeti Mohan, Javed Ali, Sid Sriram, Shruti Haasan, Shashaa Tirupati, Khatija Rahman and Abhay Jodhpurkar are among the artistes who had joined hands for the initiative.

Not just that. Popular percussionist Sivamani, sitarist Asad Khan and bass prodigy Mohini Dey were also part of the project.

The song paid tribute to the never-give-up attitude of frontline workers such as doctors, police officers, nurses, people feeding stray animal and every individual helping to curb the impact of Covid-19 by putting their life at risk.

On how the song took shape, Rahman said, “After Prasoon wrote the song, and I set it to tune, each of the artistes recorded their parts in their own homes within 10 days, and I put them together.”

Talking about the Covid anthem, Prasoon Joshi said, “Though this is not the most ideal of circumstances for creativity, as artists we have to break through adversity and catch the finger of hope. My poem is centred around the thought of the un-putdownable spirit of us humans. We have much to learn, but together we will surmount the odds, we won’t give up.”

Interestingly, this is not for the first time Rahman is part of such initiatives. When India celebrated its 50th Independence Day in 1997, he came up with the ‘Vandemataram’ album, which echoed from Kashmir to Kanyakumari.

More than a decade ago, the ‘Mozart of Madras’, as he is called by his fans and admirers, composed ‘Semmozhiyaana Tamil Mozhiyaam’, an anthem for the World Classical Tamil Conference.

In 2019, for Vijay-starrer Tamil film ‘Bigil’, Rahman came out with ‘Maathaare’, and ‘Singapenney’, highlighting the power of women.

Almost 29 years ago – in 1992 – AR Rahman burst on the movie music scene as a whiz kid with Mani Ratnam’s Roja. He has conquered the world many times over as a creator of unique sounds that have fetched him two Grammy Awards. AR Rahman’s first film, experimental as it is, continues to be watched with keen interest by his fans across the globe.