V Senthil Kumar, co-founder of Chennai-based QUBE Cinema, was recently invited by the Academy of Motion Picture Arts and Sciences, which confers the Oscars, to be one of its Members-at-Large. He is apparently the first person from the technology and business side of the Indian film industry to be invited. In an interview with Pickle, he talks about the recognition, his passion for cinema and plans for the future

Congrats! It’s fantastic that a person of your stature has been picked to be a Member at Large for the Oscar Committee.

Thank you. It’s a huge recognition to QUBE Cinema. In addition to our technical strengths in the film space, I will definitely try and contribute in making everybody aware of the diversity of Indian movies, not just Bollywood. I am not just in technology, I am very aware. And I have worked in the creative side of movies and television earlier before I became much more tech friendly. I have edited movies, television programs, I have done the sound for a lot of movies. I have been among the first in India to ever mix surround sound and songs along with some of my colleagues. Especially, Sridhar, who’s unfortunately no more. So I have a lot of experience in all of these areas. And I’ve been on the production side and lost money and made money and all of that…

So, big cinemas or streaming service, what goes into your mind now?

No, I don’t have to worry about or I think it has a definite place. I enjoy the ability to watch everything on demand. But I also know that it’s very difficult to really enjoy something, unless you close yourself off from distractions and watch it single mindedly. You shouldn’t have the ability to pause. Because the moment that you have that ability, you will use it and therefore you will be distracted. And it’s not the same thing watching something the way that the director intended. And then it shouldn’t be the way that we pause and walk away and somebody calls you and then you take that call and your wife or your mother or your father, or a pizza man come in between. We should not have that kind of distractions when watching a movie. And, on the business side, how on earth can we earn the same amount of money from OTT? It’s not going to happen even if more people watch it. I am waiting to watch Christopher Nolan’s Tenet because I can’t think of any other film that will be more my kind of movie. And I will go to the theater and watch it.

Aren’t we pushing too much? Shouldn’t we wait for things to get normal? We cannot get into a scenario like walking into a theatre with masks, face shields… even if we are sitting in dark… unimagenable to watch a
movie wearing mask.

Yeah, that’s not practical at all. The understanding seems to have been now that with masks and social distancing, the spread is so low, that it’s fine. And there hasn’t even been an explosion of cases after the protests in the US. The Black Lives Matter protests did not see a huge explosion of cases. So obviously, it’s okay if you follow the measures quickly.

Post October, our theater people have announced that films will get released – Sooryavanshi and 83. Do you see reality in it?

You have recently talked about removing projectors and installing LED screens…

Digital movie projectors were launched around 1999. They have really served a great purpose and will continue to do so for many, many years to come. I don’t deny that at all. But for the premium experience, it’s definitely going to be LED screens that slowly and surely replace projectors for two reasons. One is the picture quality in terms of brightness and contrast. It can be about 10 times brighter than what you can see. So the picture quality can be unbelievably indistinguishable from reality or as good as you can want. And then there is wider colors, all of that. Plus there’s no operating cost once you install it. It’s just going to keep working without any wear and tear on solid state. So I think the premium screens will go for that first and it will take 15-20 years before it becomes a bit more mainstream. But it will always coexist with projectors for the foreseeable future.

In a blessing in disguise, we don’t have too many theaters. For example in China, there are 70,000 screens. Many are writing about it…

From my discussions with some of the key people in the industry there, they still felt that they had room for a lot more growth in some of the rural areas, not in the urban parts of China, which are kind of overplayed. I think India also has the same problem. I certainly don’t think that there’s room for more cinemas in Delhi, Mumbai or Bengaluru, but there’s certainly space for more cinemas in UP, Bihar, and even in Chennai. Definitely India needs at least 25,000 screens from the current 9,000.

Why do you think India needs more screens?

India has a difficult problem of too few screens. So these screens are always busy with the bigger films. Somehow we need to free this up so that it’s easier for people to break up the big screens into smaller screens, and make that kind of a change very quickly and easily. It is actually surprising that nobody has done this business model and rolled out hundreds and hundreds of smaller theatres everywhere. Of course, in the cities, it’s not going to be viable because of the real estate prices. But I’m talking about just in semi urban and rural areas.

Do you feel cinema is overregulated?

Yeah. Cinema has been over regulated because unfortunately it was the only thing in those days and it was regulated heavily because we were in the license permit tracks. But cinema alone has not been completely freed up. Why should you have pricing controls? Why should you have all of these separate permissions, including police permissions for cinemas? It needs to be a single window thing in every single State.

My pet peeve is about the lack of parity between the OTT and cinema in terms of certification. If OTT doesn’t need certification, we should not have certification 9 India’s Only Film BIZ magazine for the world for cinema. And it doesn’t mean that we should do the opposite and bring certification for OTT, because YouTube will always be a user generated content, which we simply cannot certify. So it’s only right to just free up everything and let the market decide.

What’s the action in QUBE?

We have the advantage of being one of the five DCI compliant equipment, server manufacturers. And that’s an advantage because it gives us a deep understanding of the security of DCI and the mastering process in DCI because we again make the software for mastering for digital cinema. So that expertise of security and quality is getting on to some of the other products, so we built an amazing product called QUBE Wire which delivers the content around the world to theatres as well as manages the rights of the content. With territorial rights management and data control, all in the rights management system very similar to the DCI structure, it’s a patented technology across many countries in the world. So this allows the movies to sub-assign the movie and the rights for different territories. This also allows the business to grow because sometimes I might finish a movie on Monday or Tuesday, but I still needed to release in 60 to 70 countries on Friday. QUBE Wire can make that happen. And we can expand the number of countries. The QUBE Wire system is installed in all of the major chains In the Middle East, it’s installed in a couple of the major chains in Australia as well.

Finally, how have you been spending time in Covid period?

There’s been a lot of work on managing situations as it arises. We are also working on our existing products that are in the pipeline. But, being little freer and not having much other stuff to do gives you new ideas. And we are working on a few things. We have lived through good and bad times in the company, including now the worst possible time. Three months of zero business is something that nobody ever thought of. 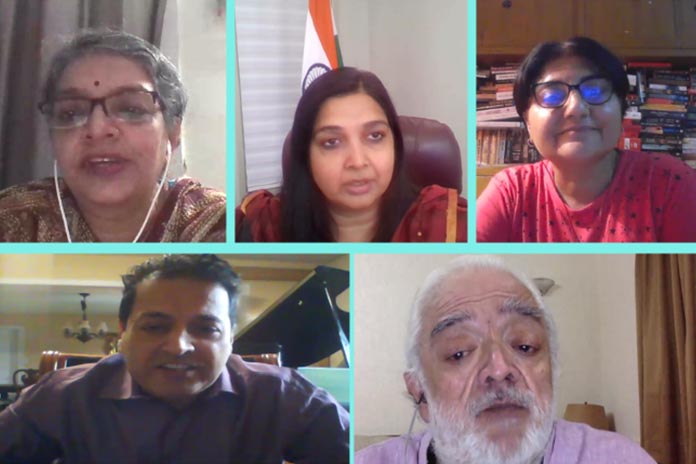